Malcolm Gladwell: The Secret to his Success 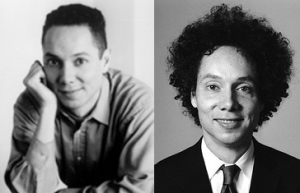 One story I’d heard was that his career took off when he grew his hair. Instead of simply being another smart guy with a modest haircut – yes, that really is Malcolm Gladwell on the left – he went feral and grew a wild and wonderful afro instead. And, in the process he went from barely being seen to ‘that guy with the hair’. Noticed and remembered.

Even if it was that easy to be successful, I don’t think that is going to work for me. The best I can hope for without surgery would be a crazy comb-over. No thanks.

The next obvious source of success for Malcolm Gladwell is from an idea that he has helped to popularise in his fabulous book Outliers: The Story of Success (Wikipedia). And, that’s the principle of 10,000 hours. Essentially, to be world class at almost anything takes about this much time in practice. As a guide that’s 3 hours a day for 333 days a year for 10 years. There are no short cuts and talent as a head start is a myth.

As a staff writer for The New Yorker (Wikipedia) since 1996, one would expect that Malcolm Gladwell probably reached his 10,000 hours many years ago. More likely he was probably well on the way before he even started writing professionally.

To say the secret to becoming a successful author is to write a lot is not all that helpful. And, whilst no one, including the author himself can know for sure which combination of mental, emotional and physical skills truly make the winning difference, I do want to point to one thing we can all practice. And, I’m going to use the man himself, specimen Gladwell, to highlight part of his expertise.

Let us turn to Exhibit A: Malcolm Gladwell talking about the main protagonists in his latest book David and Goliath to a live and entranced audience in a TED Salon talk filmed only last month in New York. (September 2013).

Watch the video and notice your thoughts about Malcolm Gladwell in action.

I propose one of the secrets to success demonstrated in this video is his ability to tell stories. I’m sure you noticed that. In particular, he’s not describing the event for you merely to observe. He’s taken his level of description a whole magnitude further. You can probably imagine David trotting up from the left a potent mix of adrenalin and defiance. Goliath is plodding up from the right, breathing heavy and scanning the horizon for his opponent. And, here’s the killer blow. Where are you? You’re smack bang right in the middle of the battlefield. And, if you’re not careful you could hurt! No wonder the audience is wearing those faces!

Now, I present Exhibit B from one of Mr Gladwell’s earlier works: What the Dog Saw and other adventures (Wikipedia). This is a collection of his essays from The New Yorker. Again I want to point to the flavour of his descriptions. This time of one of the people we meet within one of his stories.

“…a handsome man, thick through the chest and shoulders, with a leonine head and striking, oversize features. He is in his mid sixties and lives in Beverly Hills, halfway up Coldwater Canyon, in a sprawling bungalow with a stand of avocado trees and a vegetable garden out back. In his habits Popeil is, by Beverly Hills standards, old school. He carries his own bags. He has been known to eat at Denny’s. He wears T-shirts and sweatpants…” (Page 5).

Do you get the picture? Literally. Can you now see Ron standing in front of you at the doorstep of his house?

Yes, there is a time and a place to write like Seth Godin. Short, sweet, significant. And, there’s also magic in writing like Malcolm. Descriptive stories that put you in the middle of the room shaking hands with a person you feel like you know but have never met. And, this is what I believe is what makes Malcolm Gladwell successful.