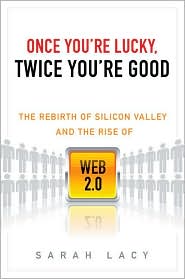 I often find myself talking about it to people who simply don’t get it. They think Facebook, LinkedIn and YouTube are a waste of time. Perhaps they’re right or perhaps they’ve been left behind…

I’m currently reading Sarah Lacy’s book on Web 2.0. She’s been reporting on startups and venture capital in Silicon Valley, the heart of all things internet, for almost a decade.

She writes Valley Girl, a biweekly column for BusinessWeek and co-hosts Tech Ticker on Yahoo!

If you get the US version of her book it’s called: Once You’re Lucky, Twice You’re Good: The Rebirth of Silicon Valley and the Rise of Web 2.0. Penguin publishes this one (May 2008). What a crap title! (View it on Amazon)

If you get the UK version, which is the one I’m reading, it’s called: The Stories of Facebook, YouTube and MySpace; The People, the hype and the deals behind the giants of Web 2.0. Published by Crimson Publishing (November 2008).

The book is an engaging inside story of how some of the giants of Web 2.0 came to be. It’s got some useful distinctions in it and the best one I’ve ever heard to put Web 2.0 into context.

On page 145, Lacy is talking about Sean Parker. He was pivotal in a number of key internet plays, including Napster with Shawn Fanning and Facebook with Mark Zuckerberg.

He gets the web. He gets it at a gut, visceral, intuitive level. He also gets it way before most. 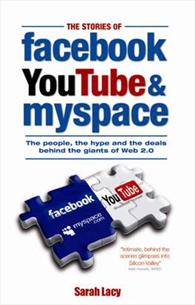 This distinction is attributed to him and it puts Web 2.0 into a context where you can hear the potential opportunities. Here goes…

Web 1.0 was about the digitization of media. Think Napster. You take your content and you make it available in new ways digitally via the net. Why buy a CD when you can get it for nothing online? The recording companies and the movie companies didn’t get it, Napster did.

The holy grail of Web 1.0 was the portal. You built a big website that had news, weather, sport, stockmarket prices etc. It was a one-stop shop and the direct translation of a newspaper. It was the geek’s newspaper because the web really hadn’t invaded everyone’s lives just yet.

Web 2.0 is about the digitization of identity. Sounds impressive huh? But what does it mean?

Basically, it’s the translation of you as an individual online. You get to tell the world who you are online through your name, contact details, photos, likes and dislikes, music, video and anything else you want to link to.

Your blog is one such outlet of your identity. I get to be me and I get to say what I want to whoever wants to listen. No wonder 75 million blogs have been created in less than 10 years!

Now take this one step further. I have my identity online and my friends have theirs online as well, so do a couple of million other people so… let’s hang out.

Facebook is the poster child of hanging out online. Those who get it, live it. They wake up in the morning and log straight on. They find out what their friends are doing right now, they organize their next social event or share their photos from their last one. No spam, minimal advertising and no big media or other company telling them what to do – only your boss at work standing over you!

And the best part… this is public domain. You don’t have to be a geek to join in because the interface is adult-proof. Even better you can socialize without getting out of your pyjamas. The ultimate global village – Long live Marshall McLuhan!

That’s the great Web 2.0 distinction. Do you get it now?