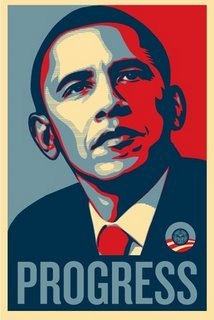 Tomorrow is the big day. Barack Obama is inaugurated as the 44th US President and the first black president.

Being the first black president is a spectacular achievement in a country where many did not believe it was possible in their lifetimes. It seemed so unlikely only 12 months ago and here we are, it’s happened. Amazing!

What’s been missed in this celebration and is potentially even more significant is…
Back in June in Book Rapper Issue 5 “Leaderful” on decentralized organizations (derived from Brafman and Beckstrom’s The Spider and the Starfish) flagged:

“On the political platform, Barack Obama may become the first black president of the US.”

“However, this will be a mere sideshow to the real change – the first president elected using a fusion of decentralized campaigning.”

“Whilst Hillary’s campaign was up to $36 million in debt based upon a classic top-down approach of seeking big donations from major players, Obama broke funding records. More than 250,000 people contributed to his campaign with more than 90% offering $100 or less. This is more contributors than any previous candidate and simultaneously he gained more than a million friends on social networking sites.“

“Whilst elections are not won by dollars in the bank they are won by grass roots action one vote at a time.”

In “Leaderful” we also asked:

“Most interestingly, if decentralization gets Obama to the White House, could this be the beginning of the redesign of democracy?”

It looks likely if this is any guide… On Saturday (January 17, 2009) Obama announced the formation of “Organizing for America” that looks to draw upon the masses of volunteers who drove his campaign to promote reform in Washington and improve their local communities. Read the Irish Time report.

Stay tuned for more on the Obama Social Networking Presidency!

Do Facebook Friends Count?
We Blog – How to Create Your Own Media Channel