By Geoff McDonald on November 21, 2008 in Book Rapper, Business Models 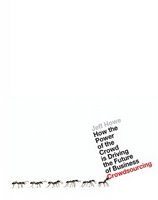 Here’s a follow-up to our earlier RAP on crowd-sourcing “The Bees Wees“…Crowdsourcing is the “act of taking a job traditionally performed by employees and outsourcing it to an undefined, generally large group of people in the form of an open call.”

This is the term and definition created by journalist Jeff Howe in an article published in Wired in June 2006.

Howe has a new book out that looks like a useful addition to the arsenal of the crowd-warrior.

It’s called “Crowdsourcing: How the Power of the Crowd is Driving the Future of Business” and it’s published by Random House Books.

An Excerpt from Crowdsourcing

Here’s some other resources for the crowdsourcer in you…

The Wikipedia version of Crowdsourcing

“The Wisdom of the Crowds” by James Surowiecki

Crowdsourcing, Jeff Howe, The Bees Wees, The Wisdom of the Crowd

Gandhi and the Starfish
The Great Web 2.0 Distinction