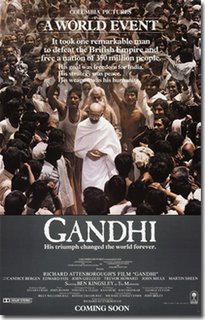 I watched one of my favourite movies last night… the 1982 spectacular ‘Gandhi‘.

Yep, it’s now 26 years old and given it won 8 Academy Awards it might be worth a look simply because it’s a good movie. It’s presented in pseudo documentary style and I presume, given it’s a Richard Attenborough movie, that’s it’s probably faithful, at least as they say at the beginning, faithful to the spirit of the man.

The thing that was most interesting was watching it through the lens of one of the books we rapped recently: Ori Brafman and Rod Beckstrom‘s “The Spider and the Starfish“.

In the movie, the British play the Spider and Gandhi and his followers the Starfish.

There’s a couple of really interesting points to notice.

The subplot in the movie is a further play of Spider versus Starfish. The Muslim leaders are at odds with Gandhi because they have a Spider mentality. They are portrayed as wanting to swap the British centralized control for their own. It causes a few problems in the movie, including the ultimate split between India and Pakistan. In real life this issue appears to be unresolved and may flare again in the next decade. Watch this space.

Re-read our RAP “Leaderful” and watch this movie for a fascinating insight into how Starfish can undermine Spiders.

Or at the least, grab some popcorn and enjoy an inspiring story. Ben Kingsley is stunning as Gandhi!