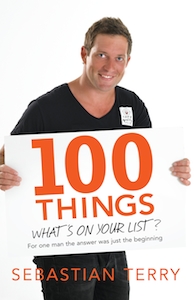 When are you most alive? What are the most weird and most cooky things you’ve ever done?

Whilst this is one-way to look at Sebastian Terry’s book 100 Things it’s probably not the most useful frame.

Let’s try this instead…

What are the things that you’ve done in your life that made you feel most alive?

Stop and have a think about this. I think it’s a great life question.

For instance, have you been on a scary roller coaster ride that put you on the edge of your seat? Have you become a parent and watched with joy and admiration as your child stumbled, stood up and then shined? Or, consider the pride you felt at completing that special something that you didn’t think you could.

Feeling fully alive is a super powerful question that builds on what Todd Henry is talking about in Die Empty.

If you want some suggestions as to some activities that would make you feel fully alive then consider this list of ten things:

These ten outrageous things are all part of Sebastian Terry’s 100 Things list. It’s a bucket list of things to achieve. And, yes, there are 90 others amazing things on his list! His journey started at the crossroad between completing college and starting a job. Added to this was the sudden death of a close friend. It sparked a rethink of life for Seb.

He asked himself this question:

If I knew I was going to die, would I change anything?

Perhaps, right now is a good time to stop and reflect on this question. Are you ready to die?

[Tweet “Seb asks a great question: If I knew I was going to die, would I change anything? via @Seb100Things”]

And, my interest in this is two-fold. I want to feel more fully alive. And, in writing about manifestos I have the tool to do it. A bucket list of 100 things is a form of manifesto. It’s a super simple way to express your intent in the world and make a public declaration about it. It says, ‘Here’s what I want accomplish in my life’.

The Power of Public Declarations

And, Sebastian Terry’s story is a fantastic example of what might happen if you go public with your declarations. As he started his adventure he shared it publicly by blogging about it. And, along the way he attracted a strong following that built a momentum of help and support. It reached a point where people were emailing him to help complete his list. And, this opened up a host of doorways to complete things that seemed impossible or unlikely otherwise. For Seb, sharing his list in public was akin to drinking Red Bull. It gave him wings!

One of Sebastian Terry’s 100 Things was to write a book. And, that’s what we’ve been talking about here. It’s an engaging story with short sharp chapters making it an easy read. I gobbled it up in two days. Inspiring stuff!

So, the obvious question is this…

What’s on your list? What are you the things that you could take on to inspire you to be fully alive?