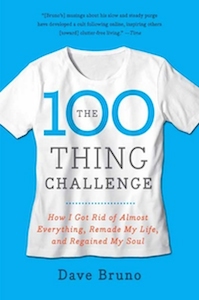 Do you believe in coincidences? Sometimes life is too weird and you can only wonder at how two odd things can come together in seemingly random ways.

The previous book I read was by Sebastian Terry. It was called ‘100 Things’. And, this book, that I’ve just finished is called ‘The 100 Thing Challenge’. It’s by Dave Bruno. And, the funny part, even though the both have the seemingly obscure title reference to ‘100 Things’, in terms of subject matter they don’t have a lot in common after this.

Sebastian Terry’s 100 Things is about a bucket list of things to fulfill in your lifetime. I wrote about it here. In contrast, Dave Bruno’s book is about consumerism. And, in a nutshell, about a personal challenge that he took on to live for 12 months owning only 100 things.

Whilst they seem to be unrelated, there is a deep divine and desirable connection. Both authors started something as a personal adventure. Seb wanted to be more fully alive and took on a list of daring adventures. And, by publishing about this on his blog he attracted a willing band of followers and supporters. Dave also had a viewpoint about life that he wanted to explore. He’d been blogging about consumerism – that big machine that constantly invites, cajoles and entices us to buy more stuff.

[Tweet “What’s your game? And more importantly, what are your rules for your game? via @guynameddave”]

Seb’s game was to write a list of 100 things and go and do them. Simple.

Dave’s game was simple in idea and needed a few rules to clarify how to play. To win he had to live with 100 things or less for a whole year.

That’s simple, but what does that really mean? To define it a little further he came up with eight rules:

TIP: Note the two layers here. First, the end goal. Second, the boundaries, limits or rules for what is acceptable play or not. This simple description of a game is exactly the formula for creating a manifesto using the Ten Commandments as a framework.

To certain extent we are always living and impacting people like a pebble being thrown in a pond. We do something or we don’t do something and it has a ripple effect on those friends, family and colleagues around us. Whenever you create a new game to play, in the manner of Seb or Dave, you will create an even bigger ripple effect. And, this has nothing to do with the size and scale of your game, it simply has to do with change.

Any new adventure will disrupt the status quo. And, if it’s a new life disrupting adventure for you, then there’s a good chance others will also be disrupted. Be warned and be ready for this!

Seb tells the story where he had a phone call from his Mum who wanted him to come home and, essentially, get a job and lead a normal life. Once Seb started to share with her about the difference he was making in people’s lives her attitude changed.

Likewise, Dave suggests that when you go out on a limb like he did, then don’t expect too much support from the people around you. They will all have an opinion about what you’re doing. And, mostly that opinion will be centered around living life as it used to be.

A great metaphor for this is a rocket taking off. It needs an enormous amount of energy to take off. And, once it breaks through the atmosphere it’s able to orbit planet earth with relative ease. And, if you’re thinking about launching anything, be it a sensible new business or a crazy, carefree conquest be aware of the energy it will take to get started.

I think the lesson from both Seb and Dave around this is to keep your eye on why you’re doing it in the first place. This will give you the strength to continue in the face of the obstacles that you will face.