By Geoff McDonald on December 16, 2014 in Infographic

What’s your favorite TED video? Here’s one of my favorites… You may have seen it… It’s been seen over nine million times and it’s listed as one of the TED Classics.

It’s by Hans Rosling. It’s called ‘The Best Stats You’ve Ever Seen’. Bold title! I love this TED video because Rosling brings two of my favorite things together in one dramatic performance. It’s about design and storytelling.

If an infographic is a 2D static visualization of data, then this performance is a 3D show. Hans animates his data on world health and at times takes on the roll of race caller of a horse race in sharing his interpretation of what is going on around the world. 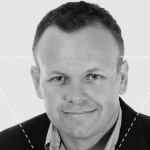 It dovetails beautifully with Darren Hill’s blog post ‘The Fluffy Things That Drive Hard Data’. Whilst the world is pushing toward big data to capture stats on everything that moves, Darren points out that it will always be the fluffy things that drive our actions.

It’s a good call! After all we’re human beings, we’re emotional and we’re wired for stories. Any data we collect is useful unless we give it meaning. And, creating meaning is the key to any great communication whether it’s live in a TED talk or on a page in an infographic. See Hans for a great example of how to bring your data alive.