The Neurobiology of Insight

Do you want to be more creative?

The good news is that it’s much easier than you think. And, you don’t need to learn any new skills or spend hours practicing. Instead, the secret lies in the exact opposite behavior – doing less. 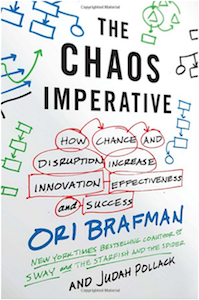 In their wonderful book, The Chaos Imperative, Ori Brafman and Judah Pollack devote an entire chapter to the Neurobiology of Insight. They share some of the latest neuroscience research that is based on live scans of the brain in action. And, they share the work of Marcus Raichle, a neuroscientist at Washington University in St Louis.

Over the past decade, the big breakthrough in neuroscience has come about through the use of live Magnetic Resonance Imaging (MRI) technology. Prior to this studies were based on either dead brains or on psychological studies that merely suggested what might be happening. Now we can literally see what is happening as it happens in a real live brain.

Until recently, a lot of the neuroscience research had been focused on tasks. For example, you show a scary picture or a picture of a loved one and notice which part of the brain lights up.

The prevailing thinking (sic) was that the brain was like a car. When you turned the key the engine started and when you turned it off the brain effectively went into quiet mode.

It turns out this is not quite accurate.

Originally researchers had noticed this and dismissed it as just ‘noise’. It’s a bit like the static between the radio or TV channels.

Raichle and his team began to pay attention to the ‘noise’. In particular they started to measure the level of energy spent by the brain on tasks and the ‘noise’ generated when the person was daydreaming.

Surprisingly, the two results were within 5% of each other.

In other words, the energy used by the brain when ‘on task’ is almost the same as when it is ‘at rest’. How can this be?

[Tweet “The #neuroscience behind your next creative insight #innovation”]

The anatomy of the brain provided a big clue. There are two separate sources of blood to the brain. This is a useful insurance policy in case one is blocked by a stroke or concussion.

This means the brain is always on. And, Raichle named this the ‘default mode network’.

What they found has turned our understanding of the brain upside down.

Whilst the analogy of the left and right brain has proven to be inaccurate, the new research suggests there are two distinct types of brain function. One is task focused and the other is non-task focused.

The simple explanation is that our senses are constantly scanning our environment and collecting data to keep us aware of any potential danger. This might include hearing a sabre-tooth tiger in the bushes, seeing a car coming down the road or sensing that our boss is in a filthy mood. This is a basic survival mechanism.

One way of saying this is that our background brain or ‘default mode network’ is busy collecting and sorting information to provide a narrative or story about the world and our place in it. And, from this we decide what action to take.

[Tweet “How to be more creative with less effort #neuroscience”]

The key point is that it’s in our downtime, when we are not doing task-based work that our brain updates our narrative or story.

And, this is the key to our creative insights and ‘aha’ moments. We need to spend enough daydreaming non-task focused time to let our brains work out and update our story about how the world works.

Thus, it’s when we shower, go for a wandering walk or wash the dishes that our brain comes up with these moments of insights.

How to Be More Creative

It all comes down to this…

To be more creative you don’t need to do anything. In fact, you probably need to do less. Whenever you need to sort through an issue – be it work, family, relationships, money, life or health, then stopping doing task focused activity. Take a break and do something else – ideally not much else.

In particular, the best thing you can do when you are pushing toward your next deadline and you’re not getting the results you want… is to stop. Change your activity, switch off and come back to it later. You’ll not only be more relaxed, you’re more likely to come up with the answer you’re looking for.