By Geoff McDonald on November 5, 2010 in Book Rapper 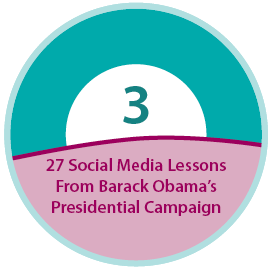 Obama’s campaign was very clear on what was important.

The entire campaign was based upon the clear goal to have people vote for Obama as US President. This mandate could be spoken in a handful of words. And, all features and activities of the community were geared around this objective. The clear strategy was to use the online tools to organize offline action. Too often social media is seen as separate to creating action in the real world. Obama’s campaign focussed around four critical actions : (1) join in (2) donate money (3) invite others (4) vote on election day.
Action : What’s your mandate in less than ten words?
Action : Translate your big picture vision into critical actions.

2 Design For Consistency
4 Tell Your Story