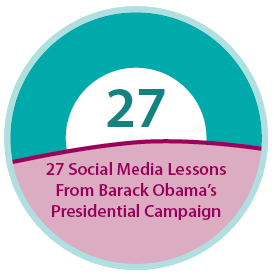 User generated content was a significant part of the Obama campaign. The most famous example was Shepard Fairey’s Obama poster (we paraphrased his poster for  the cover of this issue). Will.i.am also sparked a viral sensation by setting Obama’s Yes We Can speech to music prompting 26 million views on YouTube. Wallpaper and ringtones of Obama quotes were also created and shared by supporters. User generated content provided a constant supply of new material and was more valuable than an ad campaign at no cost.
Action : Inspire user generated videos as a show of supporter power.