Obama’s Campaign used comments to listen to their community. 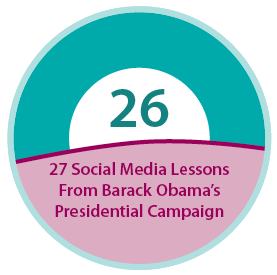 One of the most under-rated elements of social media is the Comment. They can turn a one-way blog post into a conversation, turn a negative statement into a positive one and become the public pulse of your movement. During the Obama campaign an informal competition broke out as to who could comment first on new posts. Comments were self-moderated with readers vetting and flagging inappropriate content. Staff then reviewed the comments and the action where necessary. This supported the empowerment theme of the campaign.
Action : Listen and respond to the feedback and comments of your community to enhance conversations, observe the pulse of your campaign and empower users.