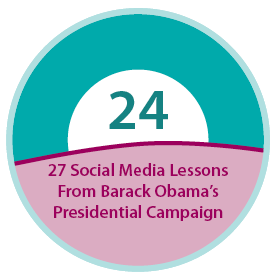 Learning is best applied when it is a two-way street. A key platform of the Obama inclusive ‘We’ campaign was to learn from their supporters. Campaign managers noticed which Obama material was reposted on Flickr or YouTube. They also encouraged users to submit content saying what they did and what worked on their MyBO account. They also invited users to teach other.
Action : Listen, watch and learn to improve your performance by letting your supporters share what works for them.