Obama’s Campaign provided the tools for supporters to engage where ever they were. 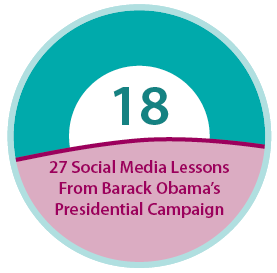 Smartphones now offer the chance to connect with your supporters wherever they may be. Mobility is the new frontier of the online world. The Obama iPhone app was installed by 95,000 people in 33 days leading up to the election. It had almost as many features as the website. It provided:

Action : Provide mobile ways for supporters to engage as they go about their lives through their smartphones.