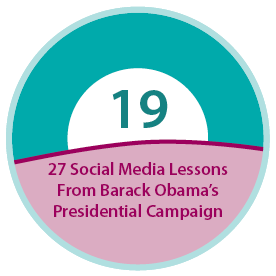 The first point of contact for many Obama supporters was on their home territory or preferred social network such as Facebook, Linked In or Twitter. The Obama campaign then invited them to play on their own social network, MyBarackObama.com or MyBO. The primary function of this was to enable supporters to connect with one another. More than 3 million did. This allowed groups to self-organize and form around their areas of interest such as local areas, particular groups eg Hispanics or special interest groups such as climate change.
Action : Provide the tools to put your supporters in charge. Let them organize themselves and connect to each other.