Obama’s Campaign enticed supporters with the things they really wanted. 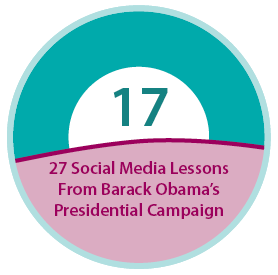 New groups and communities were also spawned. To do this your first challenge is to spark excitement, energy and engagement. Offering incentives that have high appeal to your audience and are easily delivered by you is the key. Obama offered a series of phone, face-to-face and dinner meetings with him. This was the ultimate prize for his supporters that cost little more than his time. It also confirmed his positioning that he was approachable, listened and was a real person. These prizes were also rewards for small donations reinforcing the view that every person and every contribution mattered.
Action : Offer rewards that have high value in the minds of your supporters and are easily provided by you.
Action : Offer rewards that reinforce the values and culture of your community.