Obama’s Campaign was built on the shoulders of existing groups. 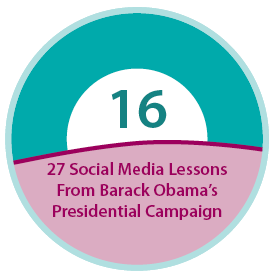 At the heart of Obama’s campaign were the relationships that were built with various groups. Some groups pre-existed his nomination, including ones on college campuses and Facebook groups. Find out where your audience already lives, meet them there, listen and amplify their message as well as yours. Then invite them over to your home, ie your website.
Action : Source and amplify existing groups and conversations.