Obama’s Campaign used the phone as a crucial tool to engage supporters. 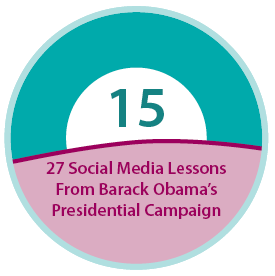 One of the key tools developed by the Obama campaign was the Neighbour to Neighbour call system. This online phone banking tool enabled supporters to make calls from home rather than trudge into the field office. This was significant. It enabled supporters to contribute in 5-10 minutes time blocks rather than having to slot in one or two hours. The call system was also linked to an individuals MyBO page and added to their Activity Index. This meant all of their actions could be easily counted and displayed and they could be publicly acknowledged as a result.
Action : Use online tools to facilitate other action.
Action : Have real people call other real people.

14 Mobilize Up Your Ladder
16 Tap into the Existing