Where Are We Now?

Book Rapper Context piece for Jeff Jarvis‘ What Would Google Do? 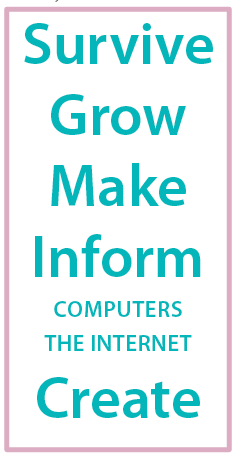 Over the past 20 years we’ve seen a few changes…

So what’s going on? What’s driving these grand transitions? How do we explain all this upheaval?

The history of the world in five words…
Survive, Grow, Make, Inform & Create.

Got it? Let me explain a little bit more…

Does that explain things? Does that put Google in its rightful place? Perhaps not, a few more distinctions may be needed.
Some people hold the view that we’ve moved beyond the Information Age or Computer Age. They suggest we’re in the New Economy, the Digital Age, the Internet Era, the Conceptual Age and even the Attention Age.
Where we’re at right now clearly depends upon what map you’re using.

My map has the five great eras with some sub-eras within.
Within the Information Age, there have been two distinct sub-eras. The first is the rise of the computer and the second the rise of the internet.

The first era of computers emerged during the Second World War. The need to decipher codes directed attention to code cracking machines and computing power.
In the 40 years it took to create giant mainframe computers and then shrink them to our desktops an array of great businesses rose to worldwide success.
IBM, Microsoft, Ikea, Oracle, Dell, Apple, Bloomberg, and Nike represent some of the success stories of this era.
In the 1980s, the war machine also prompted the development of the internet. The US government wanted a decentralized system to manage their missiles.

The internet arrived on our PCs around 1995. Fifteen years later we have a new set of industries and businesses emerging.
This is where Google belongs. Along with Ebay, Amazon, Linux, Skype, Firefox, Wikipedia, Facebook and Twitter.
Whilst these examples are not all financial successes, they do represent a new way of thinking and organizing the world.
And that’s what Google and this issue is about.

Which reminds me of an old story about a successful businesswoman who goes back to visit her favourite business professor many years later.
Whilst chatting in the professor’s office, the ex-student notices an exam paper on the desk.
She points out that the questions are the same as when she was a student.
To which the professor replied, “The questions are always the same, it’s the answers that have changed.”