The Power of ‘Us’ 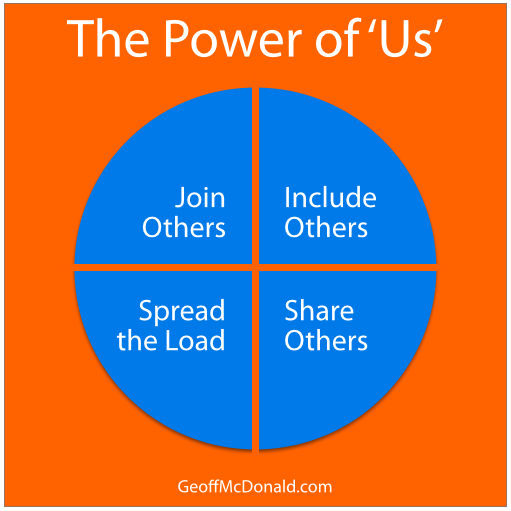 Previously, I wrote about my word for the year ‘Us’. And, I’m already finding it’s working it’s way into my daily thoughts and my plans for this year. Here are four ways you can use this to your advantage:

I’m now actively looking for ways to include others rather than playing my usual role of solo man. For instance:

TIP: What’s one thing that you are currently doing on your own that you could ask for help from other people?

I’m now spending more time on social media. For some of you this might be a bad thing! Previously, my not so clever social strategy was ‘hit and run’. I’d log on to see what people were doing, maybe leave a quick comment and then leave as quickly as I could. I was acting as if I was too important for it and doing the least I could to make an occasional appearance to keep the masses happy! 🙂

Now, I’ve started to think of this as a way to engage, converse and support other people. And, as a result I’m spending more time sharing other people’s content rather than just pushing my own barrow. My experience also changed from ‘must do’ to ‘want to’. I like the idea that I’m now helping others.

TIP: Take on a daily habit of sharing other people’s content. Perhaps 3 or 5 per day…

Only a handful of my close friends would know I’m a painter and a sculptor. Or, at least I’ve dabbled with this in past. (You can see some of my work from 10 years ago here.)

The reality is that I haven’t picked up a paintbrush for a few years now. And, I still want to get back to it. One day… Some day… The idea of having another solo show is too overwhelming right now. However, the idea of putting one or two pieces of art in a group show is something that I could achieve.

This is the power of ‘us’. I don’t have to do it all on my own anymore.

TIP: What are you thinking is all too hard right now? And, who could you partner to spread the load?

My friend and colleague Lauchlan Mackinnon has created a special event called 2015 Kick Start where he has invited a group of experts to contribute their best idea for growing your business in 2015. When he asked me to join in I jumped at the chance because it’s another aspect of ‘us’.

If only one person had contributed an article it might have been a speck of gold. And, now that 14 people have contributed articles it’s grown into a valuable nugget.

Can you see the power of collaboration? It’s the power of creating something bigger simply by having a few people contribute a small amount.

And, best of all this is a short-term project. The content will be available for two weeks only so the level of commitment to join in is modest.

TIP: Where can you join others in what they are doing?

TIP: And if your ideal event is not out there, what could you create and lead the way?

Where could use the power of ‘us’ to expand, simplify and bolster your life and your business?