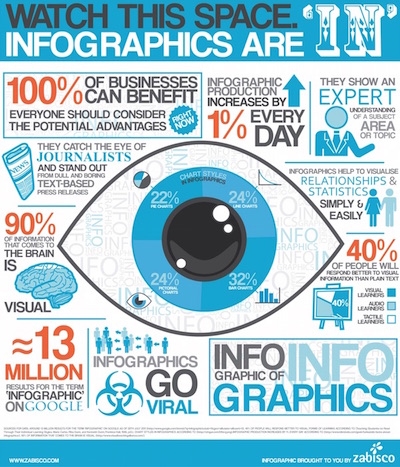 The Power of Infographics

Recently, I was searching the web for some really cool infographics. And, on a single page I found a whole host of them. On the surface they looked pretty. And, when I looked a bit closer there was something else going on.

The page I found was called ‘Why We Hate Infographics (And Why You Should)’. Mmm… no point beating around the bush! And it’s a great headline because it says it straight AND because it takes a contrary view.

Yes, infographics are hot right now. And, it’s simply that we are so overwhelmed with content and data that sharing it visually is a good way to go. However, as Cyrille points out, not all visuals are good visuals.

Read the article to find out more about Infographics and the four reasons to hate them.

This article also prompted me to consider two new angles for writing and presenting your content.

The first angle is the contrary view where you zig when everyone else is zagging. Infographics are hot right now so it’s a wave of popularity that is worth riding if you want to capture people’s attention. Then, inside this niche you can stand out even further by going against the grain.

2 The Power of Hate

The second angle is to focus on what doesn’t work.

Mostly, we write about what works. And, this is a powerful place to create good content from. However, it’s worth noting from a psychological perspective that if you want change to happen then it’s worth focusing on what you are moving away from. This is a more powerful position when you’re starting out. For instance, if you want to lose weight, focus on the cost and the potential illnesses you might develop if you don’t change. Then, once you have some momentum you can focus on a toward-goal. For instance, to look good in your bathing suit.

COMMENT: I probably don’t use the the contrary view or the power of the away from motivation enough in my headlines and writing. Do you?

How to Design Effective Goals
How Fast Can You Change?