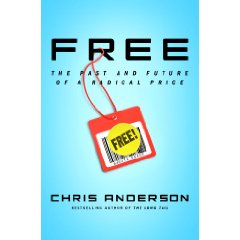 One of the fun questions that is often asked at dinner parties and in light-hearted interviews is “Who would you most like to have dinner with?”

The question conjures up the image of a bunch of important people sitting around the table and chewing the fat over a lively debate of world-changing ideas.

The internet is offered as a provider of all things wonderful and I’m pleased to say it can also ‘invite you to dinner with some great minds’. Or, at least let you eavesdrop.

Some of the great minds of digital technology, internet marketing, big ideas and the like are having a ‘free’ debate.

It all started with Chris Anderson of The Long Tail fame (Book Rapper Make Money From Niches) and Editor of Wired Magazine. He’s written a book called ‘Free’ and we discussed this in an earlier blog “Free Chris Anderson”.

Well, his book “Free: The Past and Present of a Radical Price” is to be released in the next couple of days (July 7). And, it’s likely to cause a storm – if it hasn’t already.

Malcolm Gladwell of ‘Blinking Tipping Points for Outliers’ fame, (Book Rapper’s Anti Self Help), suggested in a review in the New Yorker, he didn’t think ‘free’ would work.

Then along came Seth Godin, of ‘Tribes of Purple Cows eating Meatball Sundaes’ fame (Book Rapper’s Marketing How Now). He suggested in his blog post that Malcolm had got it wrong. ‘Free’ was not some philosophical position, just another marketing move that works.

It reminds me of one of the people I’d like to have dinner with, the late great Marshall McLuhan. We can have opinions about planes, trains and automobiles, but in the end, who cares? Technology or media does what it does. Opinions about it being good or bad matter little if it works.

A bunch of other smart people have now joined the ‘free’ conversation. One more chair at the dinner table please…

Alternatively, start with Tim Berry on the Huffington Post. He gives a good overview of the issue and adds a few more mouthfuls from some new dinner party guests.

So, if you want to have some great thinkers and wonderful debate at your dinner table, do it over the net. Virtual dinner parties are probably a good thing for your hips, thighs and waistlines too!