How the Internet is Shaping Your Organisation 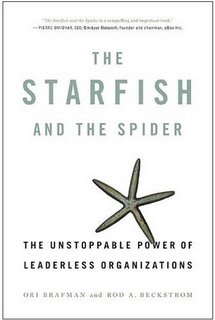 Book: Ori Brafman & Rod A. Beckstrom; The Starfish and the Spider; The Unstoppable Power of Leaderless Organizations, Portfolio (Penguin), London, 2006.

During the Cold War, the Americans and the Russians were engaged in an escalating battle of espionage and defence.

It was thought impossible that a plane could get anywhere near Russia, let alone the beating heart of Moscow, without the Russians knowing about it well in advance.

Well, it happened. By effectively flying below the radar, a German flying student flew his small plane from Germany and successfully landed smack-bang in Red Square.

You can just hear the jubilant young pilot shout “Surprise! I’ve arrived,” to the amazement of the Russian shoppers and Red Guards.

The central idea in The Starfish and the Spider will have a similar impact on business over the next decade.

Even though there are well-known examples of successful decentralized organisations around us right now, coverage of this concept in the popular press is all but invisible.

While the business press celebrates our prized leaders as the source of strength, certainty and foresight, our business schools champion ‘leadership’ as the great salvation for our confused and ever changing world.

Yet, the ticking clock in the background suggests the pendulum that swings between centralization and decentralization is making a decisive strike in the opposite direction.

Has no one noticed that the central (sic!) feature that is transforming business today is a decentralized structure called the Internet?

In parallel with our opening story, it too is a result of Cold War defence. Developed by the US Military to create a ‘leaderless’ organization in case the Soviets attacked, the Internet has created its own war on business traditions.

As Seth Godin suggests in his latest serving, Meatball Sundae (see RAP4, Marketing How-Now), the Internet has ended advertising, changed marketing forever and upturned business. Have you been paying attention; have you noticed?

Decentralized organizations pose a similar threat. The game has changed, as any music industry executive will tell you.

Napster started in a college dorm room and has dismantled the music empires of the big five recording companies one swapped song at a time. The starfish had attacked the spider and won. (See our story in the RAP on Page 7)

Historically, the Industrial Revolution gave birth to business based upon top-down control in the form of a hierarchy – think military command. In contrast, the Internet shapes the Information or Knowledge Era in which we live and this favours a decentralized approach based upon loose networks, open systems and interacting relationships.

Is it any wonder t

he Big Military of the US didn’t see the tiny cells of Al Qaeda coming? Talk about slip through the cracks…

The pendulum is swinging. Whilst it won’t swing completely to purely decentralized structures, competitive advantage in the digital economy is heading that way.

We are likely to have many more fusions like Ebay, Skype and Wikipedia.

Other landscapes will not escape the starfish imprint.

On the political platform, Barack Obama may become the first black president of the US. However, this will be a mere sideshow to the real change – the first president elected using a fusion of decentralized campaigning.

Whilst Hillary’s campaign was up to $36 million in debt based upon a classic top-down approach of seeking big donations from major players, Obama broke funding records. More than 250,000 people contributed to his campaign with more than 90% offering $100 or less. This is more contributors than any previous candidate and simultaneously he gained more than a million friends on social networking sites.

Whilst elections are not won by dollars in the bank they are won by grass roots action one vote at a time.

Most interestingly, if decentralization gets Obama to the White House, could this be the beginning of the redesign of democracy?

With the aid of the Internet, participatory democracy is highly achievable against the centuries old tradition of elected representatives going off to our Capital Cities to vote on our behalf.

In Australia, as the most governed country in the world, perhaps it is time to dismantle the Federalism of states and become the ‘Starfish Republic’.

Decentralizing the monolith of government would surely be a transformation of our society.

Closer to the lounge room is the demise of television, that bastion of centralized conformity and family life that is being transformed by the freewheeling anarchy of the Internet. Being told what to watch and when to watch it is not a popular sport for Gen Xers and Ys.

TV is also changing at other levels: the canned laughter of the sitcom is giving way to Reality TV where the ‘actors’ are free to be themselves rather than following some preordained script.

The Big Brother parallel to business is evident in the increasing demand for innovation. If you want to be creative you need to abandon corporate speak and start to think and act for yourself.

In a command and controlled environment innovation is a contradiction. To remain competitive in the cut-throat global arena of big business, decentralized units are ‘the Idea Advantage’ because they are naturally suited to the free-flowing nature of an open system.

Ironically, the presentation of decentralization as the way to leader-less organizations is a misnomer – we’re heading to Leaderful Organizations.

Instead of a starfish organization being mired by the imagery of a chook with its head cut off running around aimlessly, our organizations will become more leaderful!

If Peter Drucker were alive today he would proclaim the ‘Leaderful Organization’ as the replacement of business bossiness.

Rather than having one dominant leader or chain of leaders, our organizations will require that we all step up to the plate and demonstrate personal leadership in being accountable and responsible for our contribution each and every day.

A catalyst and an even stronger ideology that is truly worth believing in will replace the reliance on the CEO to lead the way. Building corporate cultures is like innovation; in a closed system of centralized control it is a contrivance and a contradiction.

Instead, decentralize, loosen the reins and let your employees step up to the plate in smaller circles where there is no place to hide.

In our previous RAP The Four Hour JOLT! we pointed to the demise of the 40-hour work week. Decentralized organizations make the Four Hour Work Week feasible for all of us.

This is a major change in our society. It not only changes business, government and community organizations, it also dramatically alters our roles within them and within our local neighbourhoods.
Ignore this at your peril!

PS : Co-author of The Starfish and the Spider, Rod A Beckstrom has just been appointed head of Cyber-Security – a new organization established by the US Governments Department of Homeland Security. The Bush administration has realized that a centralized approach is not working to stem the impact of starfish based hackers and terrorist cells following the failure of the centralized FBI, CIA and NSA in failing to predict S-11.

Update
The obvious update is that Barack Obama is now in the White House. Did his Fusion approach of using a grass roots, social networking approach combined with strong clear leadership work? You bet!

No word on Rod Beckstrom. He’s probably business with his new job…

Ori Brafman has since published a new book with his brother Rom. The book’s called: Sway: The irresistable pull of irrational behaviour. I haven’t read it. Scanned it at the book shops several times, haven’t been tempted enough to want to read it. Love to hear your thoughts from those who have. What’s the difference between a vision and a mission? Having a clear vision or mission statement can be a great way to provide focus, direction