The Financial Berlin Wall Comes Down!

Book Rapper has been following closely the Global Financial Meltdown. I still haven’t found a definitive book on this to RAP and today’s events explain why… It’s all still unfolding.

At the G20 summit, world leaders have announced a financial plan that’s the equivalent of the Berlin Wall being dismantled.

Their plan signals the end of Bretton Woods!

In short, during WW2, major countries created new financial rules for the world economy in an agreement known as ‘Bretton Woods’. They set up the International Monetary Fund (IMF) and other elements that became the World Bank.

Later, the US separated their currency from the gold standard – Richard Nixon in 1971. These were the seeds that produced our current credit crisis.

That’s the short view and here’s the bigger picture…

THE BIGGER PICTURE CAUSE

There are two big issues here: the financial problems and its cause.

The immediate cause is pretty obvious: too much credit was given to too many people who couldn’t afford it.

The bigger picture cause is more interesting. Simply put, America’s role as economic superpower is diminishing.

If you think of a relay race, London held the ‘financial centre of the world’ baton up until the end of the first World War. They were basically broke after WW1, so the US bailed them out and took over the baton.

Breton Woods was the next big milestone – an agreement lead by the US during WW2.

In 1971, another decisive step was made: the US separated their currency from the gold standard. This effectively meant that ‘finance’ became ‘credit’ in the sense that it wasn’t tied to anything physical.

This was the start of our current crisis – credit gets out of control, the domino effect takes over and we all fall down. 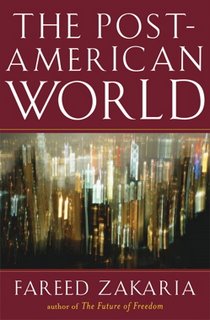 There are a number of books discussing these issues – and no definitive one here either. For example: Fareed Zakaria’s The Post-American World

Today’s agreement is a bid to create a new world order. In The Age article, note the opening line: “British Prime Minister Gordon Brown has declared the end of the “old Washington consensus“”.

The baton has been taken from the hands of the US!

This brings us to where do we go next.

The US is not disappearing as an economic power, they simply won’t be holding the baton.

One view suggests that China have bailed the US out of the current situation, which puts them in charge of global finance. 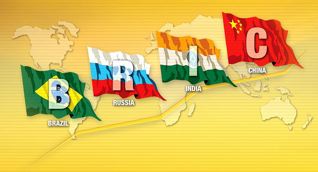 Another view suggests David Thomas‘ favorites BRIC (Brazil, Russia, India and China), along with London and New York will share the mantle as global centres.

In others words, there won’t be a single holder of the baton, more a united holding.

This makes sense in terms of globalization and interconnected economies.

Today’s agreement is a financial landmark.

It’s signals the end of one era and the beginning of another.

It might also mean the beginning of the end of our current recession.

In terms of when this whole thing turns around… my opinion…

Innovation is the key driver for business development and growth. Currently innovation is occurring at a faster rate than ever before. And it’s accelerating.

I suspect we’ll be back on path sooner rather than later and today’s agreement will provide the platform for this to occur.