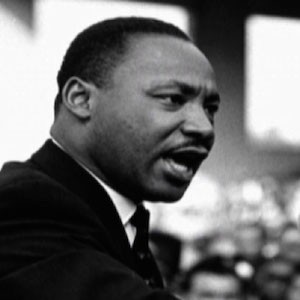 Today is Martin Luther King Day. It’s a national holiday celebrated in the US each year on the third Monday of January. And, given King’s I Have a Dream speech is one of the all-time great manifestos, I want to review a couple of his methods for leading the civil rights movement through the lens of Ideas Marketing.

Firstly, the holiday: What does it mean to create a holiday around a person or an event? For many people a holiday merely means ‘no work’ regardless of the occasion. And, an annual holiday is like our birthday; it’s a ritual of acknowledgement. It’s not a prescription for a particular action, except to say ‘we honour this’ by remembering it.

In this case it’s a holiday named to remind us of someone who represented an idea or a movement.

For some people there may be specific rituals to perform on this day, such as attend official ceremonies, say a prayer or have a reunion with old friends. And, for other people it might be the anti-day – the day you have when you’re not having your usual working day. And, you might go fishing, lie on the couch or write blog posts.

TIP: What do the different holidays through the year mean to you? Which ones have meaning and which ones are just time off?

TIP: Likewise, how do you celebrate your birthday? For me, I treat it as a personal holiday.

The ‘I have a dream’ Speech

King’s ‘I have a dream’ speech is an iconic moment and perhaps the tipping point of the Civil Rights movement. It is generally regarded as one of the greatest speeches ever made. And, I add to this by saying it’s one of the greatest manifestos ever created too! It’s a powerful description of a possible future world in which to live.

The speech was made in front of over 250,000 civil rights supporters from the steps of the Lincoln Memorial. That’s one huge crowd! And, it’s important to put this speech into context. It not just King saying let’s get some friends together and I’ll talk about stuff. The speech was the culmination of an organized political campaign that attracted people from across the country to a major rally in the nation’s capital. Plus, King was merely one of almost a dozen speakers on the program.

TIP: Your manifesto is your starting point for defining the world you want to create. Begin here.

TIP: Then create ways to share this through publishing and by bringing people together to experience it.

One of the decisive elements of the Civil Rights movements was the core ritual around nonviolent civil disobedience. This defined the campaign and it defined the group.

By having this ritual at the core of their philosophy King’s group were able to design campaigns to demonstrate their ideal. For example, The Montgomery Bus Boycott that lasted 385 days. It was a simple statement, that if we are going to have to give up our seat on the bus based on the colour of our skin then we are simply not going to participate or cooperate. We will avoid the conflict all together.

The most important aspect of this core ritual is the meaning behind it. Non-violent participation is a powerful belief about owing how you feel and how you respond. Whilst we may not be able to influence what others do to us, we always have the power to choose how we respond. This was considered a significant mental turning point for the movement – the shift from victim to ownership. The power of the white racists was diminished when the blacks refused to respond. And, gradually the blacks began to believe they had the power to change things.

TIP: Your rituals are ways to act out your core beliefs and philosophy. What is your philosophy? What are your beliefs?

TIP: How can you translate your ideals into specific action that can be repeated?

Question for comment: Who is Martin Luther King to you? Inspiring? Important? Just some guy?