By Geoff McDonald on January 3, 2010 in Book Rapper

iPresent: How to enthrall your audience like Steve Jobs – Part 8
Derived from : Carmine Gallo; The Presentation Secrets of Steve Jobs 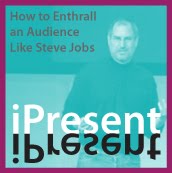 Do you know where the word ‘phoney’ comes from?
If you guessed it had something to do with the ‘telephone’, then you’re on the right track.
The first phone conversations were not considered to be real conversations. They were ‘phoney’.
Today this word is synonymous with ‘fake and false’.
Most of us now accept phone calls as being a valid way to catch up, chat up and make up with our friends, family and colleagues.
Other communication modes have taken a similar path...

New Communications
Digital media is changing the way we communicate. Many of our communication industries and professions are morphing too – or at least they need to be!

This Book Rapper issue is centred on keynote presenting. And like everyone else, professional speakers will need to heed the seeds of digital media. Their path sounds like the introduction of the telephone: a move from the natural to the virtual. A natural conversation is face-to-face, in real-time and two-way. A virtual conversation may be the opposite:

Or, it may be a hybrid, some combination of these three styles.
Get the complete iPresent issue from www.bookrapper.com

Hot Books For 2010
iPresent: How to enthrall your audience like Steve Jobs – Part 8