This article is derived from Ori Brafman and Rod A Beckstrom‘s book The Starfish and the Spider. We explore Decentralized Organization examples and comparisons to Centralized organisations and Fusion organizations that are a combination of the two.

In the Industrial Age, the top-down controlled hierarchies of centralized organizations were dominant.

Now, in our Information or Knowledge Age, and inspired by the decentralized structure of the Internet, we are witnessing a swing toward loosely connected networks or cells. The immediate future suggests a flood of hybrid organizations that will change our view of organizational structure and leadership. Here we look at Decentralized Organization Examples, plus comparison examples to Centralized and Fusion organizations.

Spiders: Spiders are just like us, chop off their heads and they’ll die.

Dictatorship: Dictatorships are usually ruled by a single powerful figure, the easy-to-spot sign of a centralized organization. If you can stop the leader, you can destroy the entire group.

Military: Traditionally, the military has been the classic example of top-down or hierarchical management. The General orders the Captain who orders the Lieutenant who orders the…

Government: Governments are classic top-down structures lead by the President or Prime Minister, followed by Senators or Ministers who each have a team below them. Right at the bottom are the voters who get to have their say with a single vote every couple of years.

Television: TV shows are created by centralized organizations that decide what we watch and when we watch it. And, if think literally about it, one message is sent down the airwaves for us to watch at the other end.

Typical Corporation: The typical corporation is structured like the military. At the head is the CEO followed by other ‘Chiefs’, a string of middle managers and the workers below. 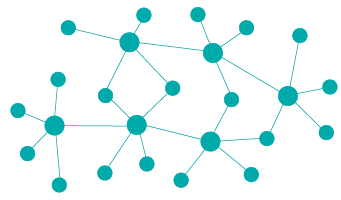 Starfish: The starfish is the animal kingdom’s primary decentralized organization example. Whilst they may look similar to spiders and they are structured very differently. They don’t have a head. And, if you chopped off a single arm, it’s likely to grow back.

The Internet: This is the classic decentralized organization example of our time. It was deliberately created to overcome the limits of a centralized military command and the threat of missile attack. This decentralized structure is built upon the humble hyperlink that connects all the separate pages, websites and networks.

Our Brain: If the internet is the classic decentralized organization example of our time, our brain is our physical equivalent. Whilst our bodies are centrally controlled by our brain, the structure of our brain is very different. It’s a network of neurons. Whilst the loss of certain parts of the brain will cause function loss, it is possible that the brain can rewire itself as it learns new things.

Alcoholics Anonymous: AA is not organized in the traditional sense. It is simply run by local members who set up local chapters. The strength of this decentralized organization is the strong ideology that underpins its work.

Apache Indians: The Apache Indians are a classic decentralized organization example for communities. This made it extremely difficult for the Spanish Conquistadors to conquer them because they couldn’t find the core leadership of the tribe.

Terrorist Cells: Terrorist cells represent the best military decentralized organization example. And, this explains the difficulty the west has had in coming to terms with Al Qaeda, finding Osama Bin Laden and the war in Afghanistan. It’s the centralized versus the decentralized.

Peer to Peer Software: Peer to Peer software is uses bits of information contributed by many people. For example, Bit Torrent downloads a part of the overall file from numerous computers spread across the globe. 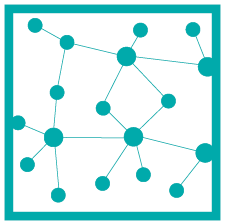 Reality TV: All Reality TV shows like Big Brother, The Amazing Race and Survivor operate in the same way. The ‘actors’ do and say what they want all within a centralized structure set up by the producers. Then, the overall story is edited and published by the producers.

Wikipedia: Comprised of thousands of volunteers, Wikipedia is based on a wiki or open platform for editing the encyclopedia entries. A skeleton staff of employees oversee the venture.

Craigslist: Whilst the organization provide the platform for listings, users are free to post what they like within the guidelines set out by the platform owners.

Supermarkets: The owners employee people to set up and stock the store. Users are free to wander and select the items of their choice.

Ebay: Just like the supermarket, Ebay the company set up the infrastructure and users are free to list items, view items and bid for items.

Toyota: Toyota employs over 300,000 people. And, they all belong to independent business units controlled by an overall corporation.

GE (General Electric): Similar to Toyota, GE are arranged as a series of independent business units each with their own profit and loss.

Skype: Skype is owned by Microsoft. It’s a hybrid peer-to-peer service where users install software on their computers that enables them to talk to other users.