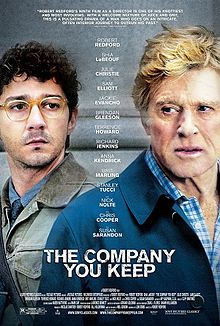 I went to see a movie tonight in Newcastle at Tower Cinema. The movie was Robert Redford’s The Company You Keep (on Wikipedia). It stars Redford and host of other well known actors. It’s about identity past and present. It’s about secrets. And it’s about possibilities. It’s suspenseful and one key character pursues the other. I’d give it four stars out of five. Well worth watching.

And, whilst the movie was intriguing, it was the ads before the movie that most struck my imagination.

Immediately it pointed to the global world we live in… watching in Australia an ad for a live event in New York and in Britain.

I had been thinking about my business model. And it was based on the premise that my online audience fuelled my live audience. However, these two ads flipped this thinking. It showed that a live event could fuel a virtual audience.  Which is kind of funny and obvious given I watch so much live sport. The live football game clearly fuels the virtual audience.

And, my questions for you…
• What’s your business model blindspot?
• What presumptions are you holding onto that may not be true?
• And, what is this costing you?