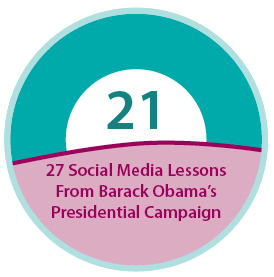 One of the keys to the Obama campaign was clarity. Clear, simple and specific requests for action were made. Likewise, clear and specific roles were offered to supporters. They could:

Each level was an increase in commitment and participation that allowed everyone to find their own way to contribute and be part of the community.
Action : Define specific roles for your supporters at varying levels of participation.