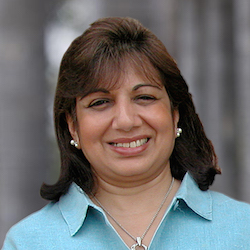 If you drive to Ballarat and visit the Mouth Helen Campus at Federation University, you might be surprised to see a road named ‘Masumbdar Drive’.

It has recently been named after one of their most successful graduate students, Kiran Masumbdar-Shaw. Forbes lists her as having a net worth of $1.2 billion making her the 4th richest woman in India. She was also named as one of Time Magazine’s 100 most influential people in the world in 2010.

Way back in 1974, Kiran came to what was then called the Ballarat School of Mines and Industries to study master beer brewing. We don’t normally associate Indian women with beer brewing. And, despite her personal qualities, it seems that sexism in India prevented her from fulfilling her career as a brewer of beer.

Instead, as fate and a fellow student from Ballarat would have it, she finished up in Ireland working for a biopharmaceutical company. This lead to her founding Biocon India which makes insulin and ultimately her fortune.

In a recent interview, Kiran made an interesting comment about naming the road in her honour:

“Obviously it’s a great recognition, not because I’m wealthy but because I’ve created wealth, I think to me that’s more important, it’s about value-creation.”

This is a powerful lesson from a billionaire – think value creation, not wealth.

Previously we talked about the three types of capital. And suggested that its the combination of money, ideas and people capital that shapes your business model.

And, the quote by Kiran points to the end result: value creation. A business model is defined as:

A process for creating, capturing and delivering value.

This raises some significant questions:

Take some time to reflect on these crucial questions. Having clarity around ‘value’ is the key to having your hands on the right levers for driving your business to where you want it to go.

COMMENT: What value are you creating and for whom?