Made to Stick and the Sticking Point – Update 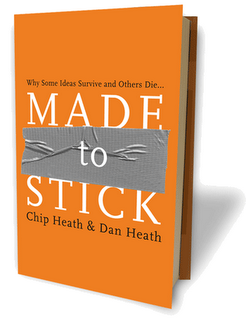 The Made to Stick book has become a classic.

I know that because it now has it’s own Wikipeda page.

Perhaps, Wikipedia has now replaced New York as the centre of the world?

So… what’s the update?

No real news from Chip and Heath.

Do they have another book in them? There’s no releases or signs as yet.

They’re still blogging away, though.

They do have some new free resources on their site.

They’re a rework of the original book applied to new situations. Like, presentations, job interviews, teaching…

They’re short from 1 to 13 pages plus some audio.

Unfortunately, the pdfs show that Chip and Heath have yet to step out of words and into visuals.

Fingers crossed, this could be their next book…

A good bonus for them…

Made to Stick has just been included in Jack Covert and Todd Sattersten’s The 100 Best Business Books Of All Time.

I haven’t seen the book and they are the leaders of 800-CEO-READ so they should know what they’re talking about.

Let me know what you think about the books on their list… Which books would you add?

As for the content of Made to Stick… Ideas are still the ONLY thing that sells!

Nothing new there… and the book’s as important as ever!

I say, read the Book Rapper issue Sticking Point or buy the book.