The Huffington Post was launched back in May 2005. A mere five and a half years later, AOL bought it for US$315 million. That’s a cool $50 million a year. (Source: Wikipedia) Today, it remains one of the top 100 websites in the world. Last month, almost 60 million people visited the Huffington Post site viewing almost 500 million pages. That’s right, last MONTH!

The Obvious Secret to Their Success

What’s the secret to their success? Essentially, it’s guest posts. Whilst they had a core team of writers, they added to this with lots of great posts by non-staff members. This is not a new strategy. Newspapers and magazines have been using the guest post business model for over a century. The Huffington Post was simply one of the first and one of the best to do it in the online space of political commentary. They’ve branched out a little since then.

And, it’s clearly much easier to have 10 people write a post each to achieve this. Or, 10 people writing 10 posts each month to publish 100 articles. Now, that’s Leverage! 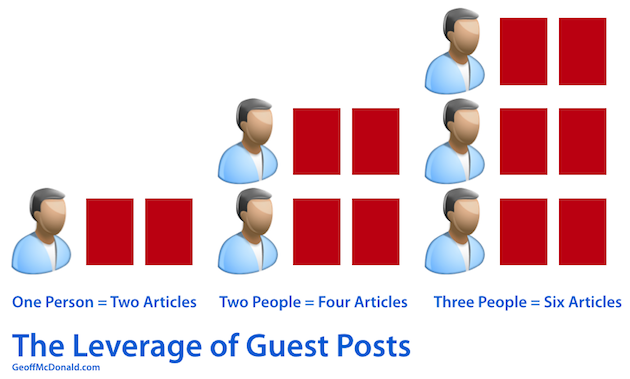 In other words, the more posts you publish the more traffic you’re likely to attract. And, once you have traffic you have the potential to promote ads or sell stuff.

There are two distinct ways to use guest posts in your business.

1 Guest Posts On Your Site

If you want to have guest posts on your site then you’ll need to provide something in return. Typically this is exposure via the traffic that is generated. Alternatively, if you have ads on your site you might pay the writer in line with the number of views their article receives.

To have guest posts on your site you can simply invite submissions. Reach out and make some requests. Alternatively, if you generate some reasonable traffic on your site, then it’s more than likely you’ll receive a few requests without doing anything.

An important consideration is your branding. For me, I don’t really want guest posts because it’s inconsistent with the brand ‘Geoff McDonald’. I want to position my ideas. However if my site was ‘Ideas Architect’, then having guests posts would be a more natural fit. This is not to say that a personal branded site could not have guest posts – it simply needs to fit your mission and positioning.

2 Writing Guest Posts for Other Sites

The second strategy to use guests posts in your business is to write for other people’s sites. Again, the reason to do this is traffic and exposure.

It’s hard to attract new people when the only site you have is your own. It’s much easier to write an article and put yourself in front of the audience that someone else has already built.

If you want to do this I suggest you contact site owners as you might approach a book publisher or magazine editor. Type a short email saying what you’ll write about and why it’s relevant to the intended audience.

Also, with any guest posts you do write put the same blood and sweat you put into your own articles. Otherwise, you’re doing yourself and your host site a dis-service and fewer people will migrate to your site to check you out. Opportunity lost!

The Law of Email Entropy

[Tweet “The Law of Email Entropy: Everything eventually becomes spam”]

One of the definitions of ‘entropy’ is the ‘inevitable and steady deterioration of a system or society.’

In other words, if you let a system or a society operate for long enough the order that we currently admire will soon become disorder and mess.

I have a theory that says something similar about email. I’ve called it the Law of Email Entropy. I believe that you let any email marketing or SEO strategy play out for long enough it will soon become a form of spam.

The Fall of Guest Blogging for SEO 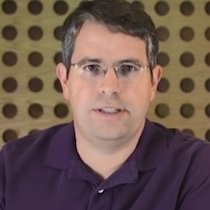 And, that’s exactly what appears to be happening around Guest Blogging. Matt Cutts has called this The Decay and Fall of Guest Blogging for SEO. In line with his comments I’ve been getting spammy email lately with regard to guest blogging.

This week I received an email from the contact form on one of my websites that has not been updated for over a year and has no blog on it. The email was asking if they could write some posts for me. Clearly, spam!

Previously, I replied to another email asking for a guest post to find out what they wanted to write about (and to see if they’d researched my site). They replied asking me to tell them what to write about. No thanks.

Matt Cutts is pointing to this rise of spam. And, given he is head of Google’s Webspam team, it won’t be long before the value of guest posts for SEO purposes will fall as Google rewrites its ranking rules. You may recall that recent Google changes to its rules with regard to back links demolished the traffic of lots of sites.

Let’s be clear here… Cutts is not saying that guest blogging is doomed for everyone. And, neither am I. What we are saying is if you are going to do it, then do it in a quality way that provides real value that’s consistent with your brand. Don’t write spam posts. If you follow this approach it will remain a powerful strategy for boosting traffic.

PS: I’m not taking guest posts at this time so please no more emails. However, I am looking for people with a great story to tell for the Ideas Architect podcast. If you’re interested email me and tell me (1) what’s your story and (2) what’s in it for me.