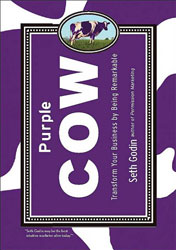 Most ideas start out in the form of a concept. It’s that first step that takes the mere thought into the realm of idea. From here the concept can be expressed in multiple ways. For example, Seth Godin’s Purple Cow. Essentially what he is saying is that if you saw a black and white typical cow in a paddock as you drove past you’d probably barely notice. Predictable, normal, expected. However, if you saw a purple cow… you might just splutter on your coffee! Seth applies this concept to innovation in business and he expressed his idea as a book. 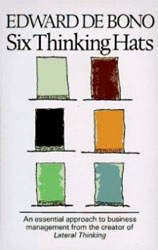 A second way to express your idea is as a set of steps or actions for someone to complete. Edward de Bono’s Six Thinking Hats describes a process for provoking a range of thinking styles. It can be used

individually, at work and where ever good people meet. He also expressed his idea in the form of a book although as Seth wrote the ‘WHAT’ of his idea, Edward wrote about the ‘HOW’ of his.

A third example that is also expressed as a book, is the accomplishment of Andrew and Sue O’Brien. As the Couple on the Run, also the title of their book, they ran eight marathons in eight weeks in eight different countries. If that wasn’t enough, they ran the whole way in all their marathons as a couple. Sounds tiring just writing about it! Anyway, they have been able to translate their result into a book, a public presentation and ultimately a community wanting to learn from what they achieved. 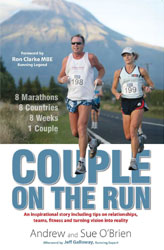 A fourth expression for your idea is to turn it into a physical thing. And, the previous three examples were all turned into a book. They could also have been turned into other things. Seth could have turned his Purple Cow into one of those dashboard animals that shakes it head as you drive. Edward could have turned his process into a toolkit – literally with six hats. And, given the O’Briens run consistently together they could have created a t-shirt series “I ran 8 marathons… and all I’ve got to show for it is this lousy t-shirt”. Hopefully they can come up with something better than that! Anyway, I hope you get the point of turning your idea into something physical.

Are there other expressions of ideas? Probably. Love to hear your thoughts about this. And any other key ones you can add to this list.

8 Nancy Duarte: Resonate
Should I Do Social Media If My Clients Don’t?