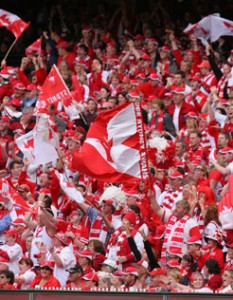 Football games are a great public vehicle for observing innovation in action and the influence of crowds. Three key factors come into play:

The first two factors create a situation where innovation and experimentation are stifled. Unless the team is losing there is no permission to ‘try anything’. After all, you don’t spoil a winning combination, do you?
Conservatism is promoted because the risk of innovating and being wrong is higher than the reward.
The third factor of immediate feedback is something desirable for innovation. You want quick results to know what works. Unfortunately, in this situation, the public pressure and fear of failure is higher than the reward.