By Geoff McDonald on January 3, 2009 in Book Reviews 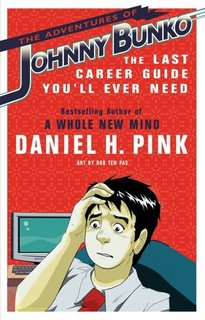 “The Adventures of Johnny Bunko” is touted as ‘America’s First Business Manga’. In the spirit of the One Minute Manager or Who Moved My Cheese, Johnny Bunko offers six simple career lessons.

Given this is the internet I’m not going to spoil the surprise. Either buy the book or visit the Bunko website to learn the lessons. You can read 50% of the book online for free.

The book itself didn’t do much for me. Sorry Daniel, I didn’t buy your book. I read it in about 15 minutes in a bookstore. His website says it’ll take about an hour…

But who cares about me… the book has hit the bestsellers list and is doing very well. It’s a fresh take on Careers. As a manga it’s written in a style that’ll appeal to youngsters questioning their future options. It’s also simple and that’s the way it’s intended to be.

Bunko is also a not-to-be-Googled book. Pink makes this point on his website. We can Google almost anything, eg how to write a resume. Instead, Pink reasons we need strategic lessons. The Post-Google world is emerging!

My summation about this book is… it’s not about the book! Check out the website to see what I mean… Pink has made the book the basis for a movement. He’s built a tribe and a community around a straightforward idea.

It’s precisely what I didn’t like about the book that makes it work… it’s simple, it’s of interest to most of us and it sparks discussion. He’s even created a competition for readers to uncover a seventh lesson to stir the conversation.

Even better, he’s inspired the Bunko Breakfast. From Japan to Romania, people are getting together to discuss the book and their careers. Pink is building the Bunko Nation!

Now that’s food for thought for your next career move!

PS: Bunko is Japanese for ‘library’. Also, Bunkobon is a small book format about A6 in size and the most popular size of Manga comics.

PSS: Book Rapper Issue 2 – How to Think Right was based upon Daniel Pink’s A Whole New Mind.