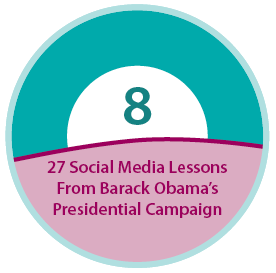 Obama was on the campaign trail for two years. Instead of one long campaign he created a series of small frequent campaigns – often for 1-2 days only. Campaigns focussed on producing tangible results on specific issues or audiences. For example, volunteer recruiting or women to women. This diversity allowed supporters to select the ones that most appealed to them. And it allowed supporters to celebrate successes along the way. This is even more critical for a corporate campaign that may be ongoing with no definitive end in sight.
Action : Chunk your overall campaign into smaller targeted flourishes.