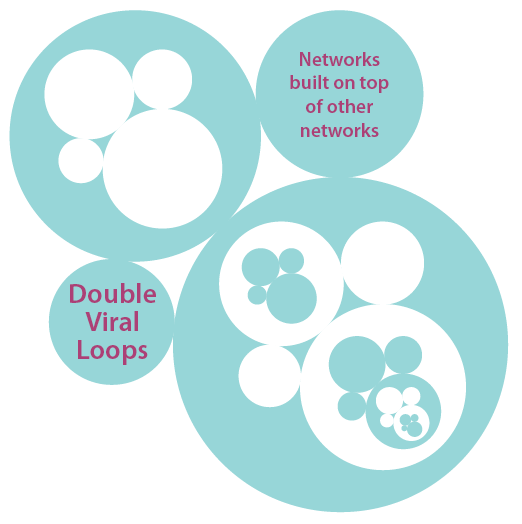 PROFIT : Double Viral Loops occur when one network is linked, stacked or piggybacked onto another. As one grows, so does the other. The key is the partnership fit. You need to be offering something highly desirable for the other network. And, ideally something they can’t easily create for themselves. Here’s three online examples of double viral loops for you to consider.

Ning is another brainchild of Netscape Navigator creator and billionaire Marc Andreessen. You can sign up for your own account to create your very own network. That’s right, DIY tools to build your own personalized network, just like Facebook. As one person joins a community group based on Ning, they’re likely  to invite others to join too. And, some of these people will then create their own networks. Effectively, a network of networks is created, or a double viral loop.
Action : What networks are you already part of? What networks have you started yourself? Is it time to create your own Ning network?

Whilst eBay created its own network independently from others, PayPal’s success was based on its ability to piggyback the spiralling growth of eBay. Traders needed an easy and secure way to transact and PayPal became the preferred supplier. They became such a linchpin that eBay eventually bought the entire company. PayPal is an example of a stackable network where one network is built upon another.
Action : Who can you piggyback on and stack your network on top of? You’re challenge is to find groups that need what you’re offering. For example, rather than assemble your own crowd, ask organizations filled with your target audience to gather people for you by offering a presentation.

Flickr started out as an online gaming network and became a photo sharing site that rode the rise of blogging to its eventual success. The key move Flickr made was to enable users to tag photos so they could be easily sorted, searched and found. This became a boon for bloggers seeking visual content to add to their written words. Flickr is another example of stacking their network onto others. Whereas PayPal rode the single network of eBay traders and YouTube grew with MySpace, Flickr piggybacked the much wider and diverse community of bloggers.
Action : Which individual bloggers could you partner with? By tapping into their network you can leverage your expertise further. Also, which phenomenons or trends can you piggyback? For instance, who’s going green in your industry?