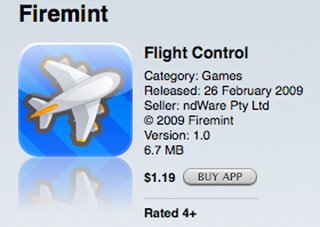 As we sing Happy One Billionth Download to the Apple iPhone Apps store, up pops a new spin on the future of gaming.

Their game ‘Flight Control’ has just become the top-ranked iPhone application in the world.

Flight control lets you play Air Traffic Controller. As the planes approach you direct their flight paths with your finger on the touch screen.

It’s so simple even Rob’s mother in law is hooked! Flight Control is one of the first Apple iPhone app games to use the touch screen as the key navigation device in a game. It prophets a new era in gaming…

In The Age article, Murray suggests, with these new controls, the future of gaming is mobile! He says,

“The fact that you can carry your iPhone or iPod Touch around with you and have good games digitally distributed that’s the big bonus and we think mobile with digital distribution is the ultimate form of gaming.”

“Personally I think it’s going to cut the knees off lounge room entertainment in time just the same as the Walkman did for music in the lounge room… eventually games on mobiles, if the user interface is sorted, then there’s no reason they shouldn’t grow to become the dominant entertainment form.”

So if music has left the lounge room, games have too, then what’s next?

Live sporting events are already on your phone.

Books have become audio or YouTubio.

Soon we won’t need a lounge room at all. Everything will be portable and mobile.

I’m still waiting for my Dick Tracy watch though!