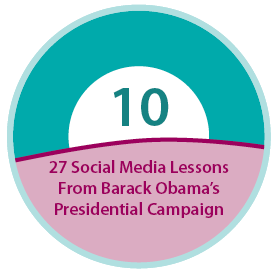 What we are going to talk about needs to match how we are going to do that. Obama’s rally was for a transparent and honest Washington DC. And, those who represented the broken political campaign became the enemy that had to be defeated. This included Hillary Clinton. In this battle it was important that Obama supporters did not fight negativity with more negativity. When Clinton was negative toward Obama’s campaign, rapid response teams mounted a new fundraising drive as a show of strength.  ‘The Cost of Negativity’ inspired more than 10,000 people to donate $25 in a 24 hour period. Tutorials were also made available on how to interact with Clinton supporters to overcome smear campaigns and maintain open and honest discussion.
Action : Define what you’re going to campaign about.
Action : Define your own rules for how you’ll engage with your enemy.
Action : Debunk any smear campaigns with a targeted team.